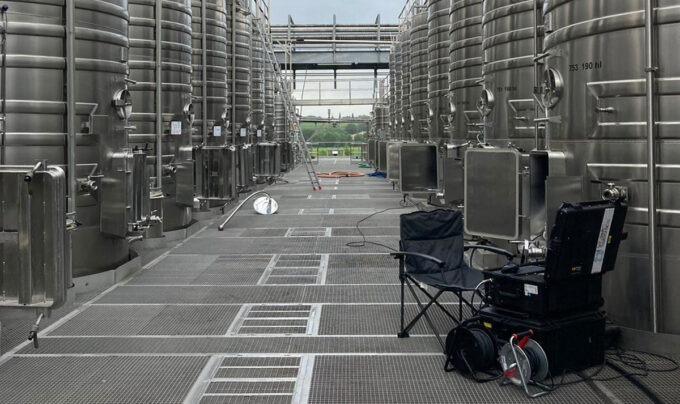 In for a challenge? Inspecting newly delivered, damaged wine vessels

What happens when a wine manufacturer finds out that a major order of wine tanks shows serious quality issues, with poor quality mechanical welds? With the tank manufacturer having filed for bankruptcy reclaim isn’t an option.

The only possible course of action to minimise potential significant losses is to check faulty welds, repair them and get the tanks into operation as quickly as possible. Easier said than done if you have no experience with tank inspections.

Fine wines – but without coolant please!

As one of the leading wine producers in France, this wine maker is set on making quality wines that require carefully regulated fermentation and vinification through temperature control. To achieve this, a coolant is used between the inner and outer walls of the fermentation tanks.

The hundred or so tanks that had been supplied, however, all showed signs of multiple leaks along the welds. If taken into use, the coolant would most certainly leak into the wine in the tanks, making it unfit for consumption.

What the client wanted from us

Having made a considerable investment in new assets that were unusable, the wine producer asked us if we would be able to check the extent of the leaks in the tanks and assess their overall condition. In this way he hoped to be able to find out if repair work to the welds would enable him to take into operation some, if not all, tanks and thereby minimise potential losses.

With the next wine harvest due in just a few months, he was also eager to have the tanks inspected fast, so that losses could be decreased even further by having them in operation before the harvest.

‘For us at Invert Robotics it was the first time that we had been called in to inspect assets in this particular industry. But also for the wine maker it was a first. Generally speaking, and certainly from a historical perspective, wine makers are small in size. Tank inspection is not something that is set as a standard. Even amongst the larger producers or cooperatives,’ Gilles Gauderlot, Regional Sales Manager Southern Europe at Invert Robotics explains.

‘The same holds for suppliers to the industry such as tank manufacturers. In this case, a smaller manufacturer bit off more than he could chew in taking on this order for 100 wine tanks. In the end, he wasn’t able to deliver the quality needed. So, all in all, it was new terrain for all of us.’

Gilles: ‘To be able to assess if our robotic platforms would be able to carry out the sought-after inspections – and to do so within the short time frame that was available – we first went in to look at the tanks.’

All tanks inspected in time

‘The inspection of all 100 tanks took us over 4 weeks. We were able to map all faults along all the welds, in all the tanks. Although we provide repair services, the scope of the repairs that had to be carried out was such that we recommended the wine maker to source a specialised repair company.’

‘Based on our inspection results and accurate localisation of faults, they were able to carry out all repairs before harvest time. So, we can proudly say, that our efforts meant that the client did not have to write off his major investment in new tanks. And, he had the tanks in operation in time to use them for the fermentation of the new grape harvest. All’s well that ends well!’ Gilles concludes.

What our client said

‘When we first called on Invert Robotics, we didn’t really know the extent of the faults in the new tanks, and what Invert would be able to offer us. They visited our site in the South of France to demonstrate their inspection solutions and ended up also offering us an objective assessment of the state of our assets. Their professional and knowledgeable attitude, confirmed in us our idea that they were the right party to carry out the inspection.’

‘After five weeks of intensive inspections by Invert, we were able to determine the exact state of our damaged assets and start the repair work with another service provider. Invert Robotics delivered on all their commitments and has continued to support us throughout, with what was for us, a challenging process.’

Interested to learn how we can help you using our unique robotic crawler? Contact our nearest sales representative!